Immune-Enhancing, Fatigue Fighting: The Many Health Benefits of Reishi Mushrooms

Since medicinal mushrooms entered the wellness-sphere, people have been losing their shiitake over them. And really, we can’t say we’re surprised. Reishi mushrooms, for example, are filled with health benefits that make them pretty darn amazing. Don’t believe it? Keep reading.

Like other functional mushrooms, the kidney-shaped reishi stimulates multiple systems in the body to regulate hormones and other cellular functions, so it can maintain homeostasis. While that may sound like a lot of hard-to-understand science jargon, it basically means that they help to combat stress.

Stress-busting powers aside, the health benefits of reishi mushrooms are extensive.

Along with their ability to help you fight through a chaotic work week, the superfood may make you feel more energized and vital as you age. And unlike caffeine, it’s non-habit forming.

Starting to see why people are excited about them? We thought so.

What Are Reishi Mushrooms? 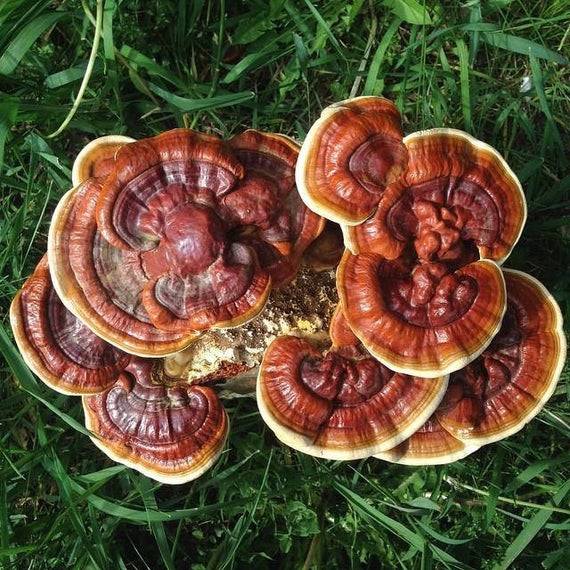 Researchers have been studying reishi for years to understand its anti-cancer, anti-aging, immune-enhancing properties. If you’re the type of person who likes to forage, you’ll more than likely find them growing on dead (or in the process of dying) trees, logs, and stumps.
Different species can be found throughout Asia, Europe, the South Pacific, and Northeastern parts of The United States. They’re generally easy to spot because of their shiny lacquered tops, which usually appear red or orange. However, depending on the species and age, they can also be black or a deep purple color.
Unlike portobellos or oyster fungi, people gravitate toward Reishi mushrooms for their medicinal merits instead of their culinary value. In fact, the mushroom, which is quite tough in texture, can have a bitter and woody flavor.
This is because reishi contains triterpenes, a chemical compound that - thanks to their…unique taste - protects it from being chomped on by birds, insects, and animals. Some people enjoy cutting the mushroom into strips and boiling it in water to extract its health benefits. However, many enjoy grinding the mushroom into a fine powder, which can be blended with other medicinal mushrooms or sweeter or sweeter ingredients like cocoa and cinnamon.
Although it seems like this nootropic food is all the rage now, reishi mushrooms health benefits have been known for 2,000 years.
Sometimes called lingzhi or The Mushroom of Immortality, wild reishi was rare before it was cultivated. Only nobility could afford it, and the Chinese believed that it grew in the home of the immortals. Hence the nickname.
There are texts dating as far back as 502 AD, showing the use of Reishi mushroom to improve memory, fight aging and strengthen the cardiovascular system. Today, people use it to boost their immune system, reduce stress, and more.

When it comes to staving off the sniffles, Vitamin C usually gets all the glory. But believe it or not, Reishi can really hold its own in the immune boosting department. Studies have shown that Reishi increases the function of humoral and cellular immunity.
Like other adaptogens, the way that reishi mushrooms work is complex. But scientists have found that they contain active substances, which kick the immune systems into high gear, so it can fight inflammation.
Many health experts believe that inflammation is at the root of most chronic diseases.
Although it’s part of the body’s natural response to stress, it can become problematic when it becomes chronic. And unfortunately, since many of us are chronically stressed, many of us also experience chronic inflammation.
While adopting an anti-inflammatory diet can help, something as simple as having a cup of mushroom coffee containing reishi can also be beneficial.
Reishi mushrooms helps boost the immune system by triggering the body to release macrophages. They’re cells, which break down foreign substance for our lymphocytes, aka T cells. They not only regulate the immune response but produce antibodies, which attack bacteria and viruses.
In a perfect world they’d always respond to threats as they should, but studies have shown that chronic stress can negatively impact them. It’s all the more reason to include something like reishi mushrooms into your diet. Along with prompting your immune system to get to work, they make the body more resilient at handling negative stimuli.

Reishi Mushroom as a Fatigue Fighter

Ashwagandha is often touted as the miracle herb to defeat low energy, but reishi is also worth trying.
It has an active compound called adenosine, which decreases blood pressure and improves blood oxygen supply. The latter is especially important because it plays a crucial role in alleviating fatigue.
Reishi is also high in antioxidants.
The free-radical fighting fungi accelerates energy production by reducing oxidative stress in the cells. This helps to improve mitochondria energy metabolism, which helps you feel less tired.

While it’s not a cure for cancer, there have been a number of studies showing reishi mushrooms ability to shrink tumors.
In one 2013 study published in Plos One, mice injected with inflammatory breasts cancer (IBC) were given reishi for 13 weeks. At the end of the trial, researchers found that the mice tumor growth and weight had been reduced by 50 percent! They also noted that proteins associated with the disease had reduced expression.
As it turns out, it may be the triterpenes (remember them?) that are responsible for reishi mushrooms anti-cancer properties.
As illustrated in one study published in the Journal Clinical Cell Immunology, the bitter tasting compounds (referred to as GA-DA) have been shown to kill cancer cells without hurting healthy ones. Researchers also determined that GA-DA initiated the immune response and may protect the body from malignant tumors.
Although it goes without saying that reishi mushrooms can’t replace more aggressive forms of care, some medical experts believe they may be a beneficial addition to traditional treatments like chemotherapy.

Adaptogens are powerful. They have the ability to help the body acclimate to internal and environmental stressors naturally. And reishi is no exception.
Reishi mushrooms contain an active ingredients called polysaccharides. They’re one of the components that make the mushroom an immunomodulator. As mentioned before, these fungi are anti-inflammatory. This means when it comes to allergies, they can help the body become more fit at fighting irritants.
Case in point, one study found that those who were allergic to grass experienced relief when taking reishi mushroom supplements for a week.
To be fair, the study was small (it only contained two people), but don’t write it off. Other studies have shown that the mushrooms ability to balance TH1 and TH2 (both part of the immune system response) can work to produce an antihistamine effect in those sensitive to allergens.

Fact: Humans are living longer. And when it comes to reishi mushrooms, adding the superfood to your routine may make a difference in how we age.
As you probably already know, antioxidants play a critical role in us looking and feeling more youthful. And as we’ve already mentioned, reishi mushrooms are filled with them. But that’s not all.
The nootropic fungi’s triterpenes help to protect the liver, as well as prevent your platelets from clumping. What does that mean for you? It means that you’re less likely to suffer a stroke or heart attack.
According to an article from heart.org, heart attacks are becoming more common in young people. In fact, medical experts have seen a 30 percent increase in those between the ages of 35 and 54.
While adopting a healthy exercise routine and diet can help prevent these acute conditions, including things like reishi mushrooms into your regular routine may lead to a longer and healthier life. And really, isn’t that what we all want?

Now that you know some of reishi mushrooms health benefits, here are some important things to keep in mind:
Although reishi mushrooms are natural, that doesn’t mean that you can’t have an allergic reaction to them. According to WebMD vitamin and supplements page, those who take the mushroom for 3-6 months may experience dryness in their nasal passages, mouth, or throat.
Rash, headaches, and upset stomachs can also occur. Because of this, some experts suggest taking periodic breaks.
If you’re worried about losing all the health benefits that reishi provides, don’t be.
There is currently little (if any) research suggesting that halting use will return you to a stressed out, grouchy mess. As with most things, moderation and listening to your body may prove the key to success.
Those who have low blood pressure or who are taking an anticoagulant or antiplatelet medication should speak to their doctor before using reishi mushrooms. It goes without saying that women who are pregnant or breastfeeding should also avoid the supplement.
For the most part, doctors believe superfoods like reishi mushrooms to be safe. And perhaps, more importantly, they’re an easy way to empower your health.
And that's why Reishi is one of the main ingredients in our RYZE mushroom coffee.
TRY RYZE TODAY 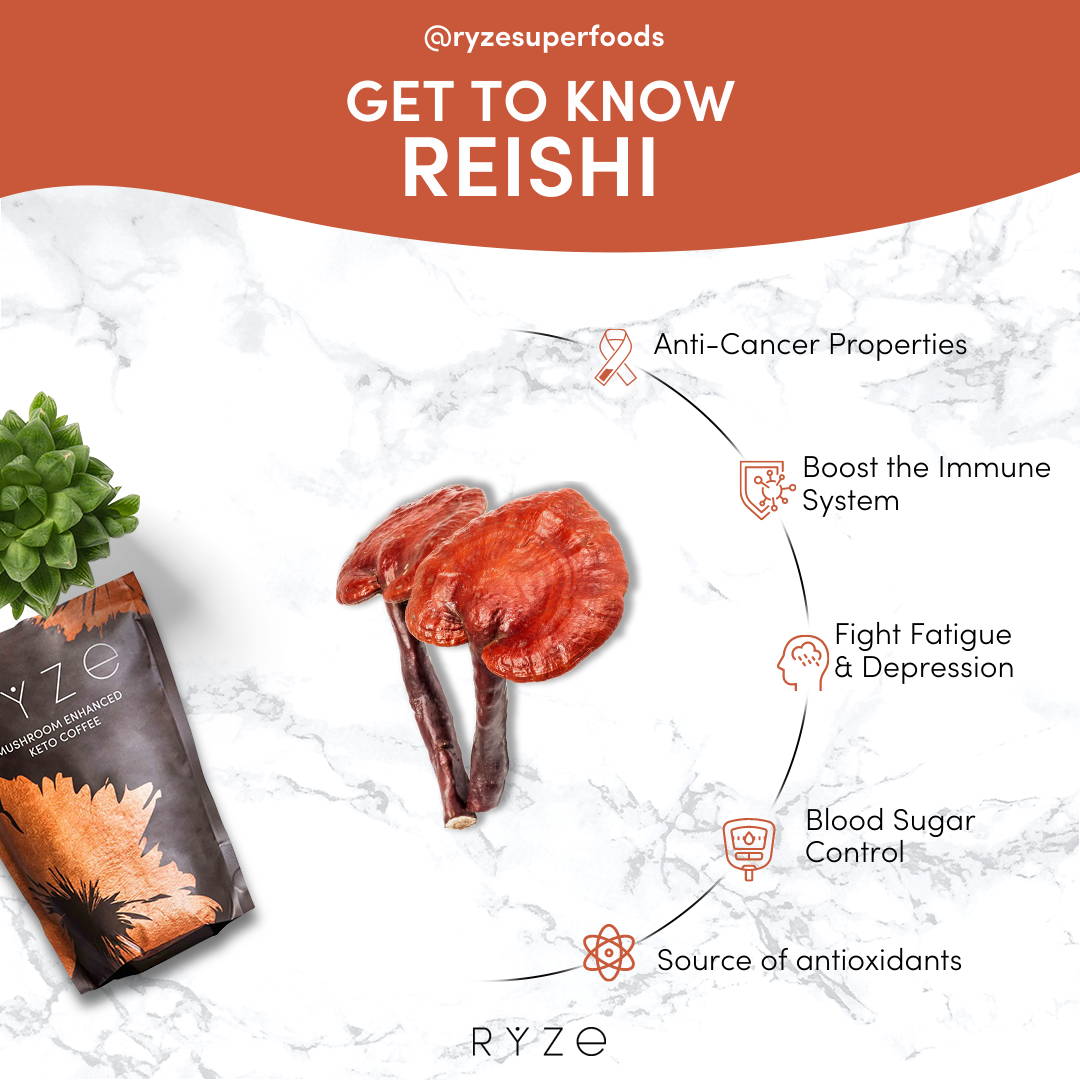 "These statements have not been evaluated by the Food and Drug Administration.

This product is not intended to diagnose, treat, or prevent any disease."